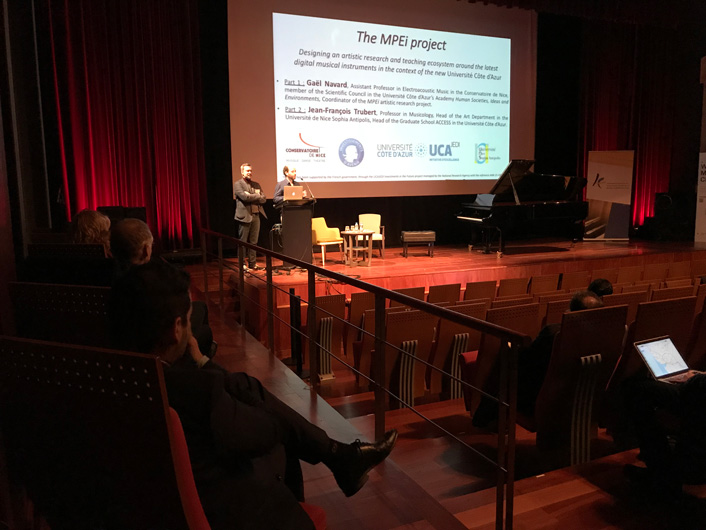 Designing an artistic research and teaching ecosystem around the latest digital musical instruments in the context of the new Université Côte d’Azur.

In 2015, a consortium of companies (Apple, Roli, KMI, Moog…) worked on an extension of the widely used MIDI (Musical Instrument Digital Interface) protocol that was called MPE (Multidimensional Polyphonic Expression). By extension, this name was kept for an emerging class of digital instruments based on fingers 3D continuous pressure to produce sounds. Pressure wasn’t really used in traditional acoustic instruments as a primary gesture to produce sounds, and past acoustic and electronic instruments generally use gestures with only one or rarely two spatial dimensions. This new class of instruments uses full 3D gestures in a polyphonic way, by far more accurate than before, thanks to the latest sensors and embedded DSP technologies. These instruments seem very promising and several companies have already invested in their development (Haken Audio Continuum in 2002, Eigenlabs Eigenharp in 2009, Madrona Labs Soundplane in 2009, RLDesign LinnStrument in 2015, Roli Seaboard in 2015, KMI K-Board4 and BopPad in 2016…). But there is a huge gap between the releases of such high-end instruments and the digital musical creation and practice in general, since all categories of instruments need a specific environment to be massively deployed, such as having sets of new compositions, trained performers and new pedagogical tools for large groups initial learning.

The Université Côte d’Azur is a new association of universities and higher education institutions (ComUE) created in 2015 and labelled IDEX (Initiative d’Excellence) by the French government in 2016. It regroups 13 institutions including art schools. In this context, the MPEi research project was launch in September 2017 by the Conservatory of Nice within the core program “Art and Sciences”. This project brings together several institutions: Conservatory of Nice, University of Nice, CIRM National Center for Musical Creation, CNRS National Center for Scientific Research, PolyTechNice… with the ambition to integrate musical schools (middle and high schools, conservatory) and research centers from different fields (composition, musicology, electronic, computer science, pedagogy) in a complete environment for developing new digital instruments music creation (historical analysis, researches on repertoire and performance, gesture studies, development and experimentation of new pedagogical tools and instruments, sensors, RF communications, DSP…).

The aim of this communication is to present how we have built a research and teaching ecosystem around a practical musical field on new digital instruments. The two central questions at the origin of the project were “what we can play with these new expressive instruments?” and “how we can learn to play these new gestures?”. It’s really the second question which influence the most the way that we build the program, because training new performers on new instruments is really a challenge that take a long time and implies a lot of researches on different fields, from performance studies to technological development of adapted tools for pedagogy. For this, we will show two practical examples of didactical experimentations: with a small group of master students, and with a large group of middle school student.

Gaël Navard is the coordinator of the MPEi research project (Multidimensional Polyphonic Expression Digital Music Interfaces. From high-end soloist ensembles to large pedagogical orchestras. Theoretical, practical studies and developments on a new class of musical instruments.). Composer and musician, he is Assistant Professor in Electroacoustic Music at the Conservatory of Nice and member of the Scientific Council of the Academy of Excellence “Human societies, Ideas and Environments” in the Université Côte d’Azur.

Jean-François Trubert is Professor in Musicology and Director of the Art Department of the Université de Nice Sophia-Antipolis. He’s part on the MPEi research project with a specialization on gesture analysis on contemporary music. He’s also in charge for the Université Côte d’Azur to build a new graduate school of arts and humanities that bring together theoretical and practical researches with master and doctorate teaching programs.

We use cookies on our website to give you the most relevant experience by remembering your preferences and repeat visits. By clicking “Accept All”, you consent to the use of ALL the cookies. However, you may visit "Cookie Settings" to provide a controlled consent.
Cookie SettingsAccept All
Manage consent

This website uses cookies to improve your experience while you navigate through the website. Out of these, the cookies that are categorized as necessary are stored on your browser as they are essential for the working of basic functionalities of the website. We also use third-party cookies that help us analyze and understand how you use this website. These cookies will be stored in your browser only with your consent. You also have the option to opt-out of these cookies. But opting out of some of these cookies may affect your browsing experience.
Necessary Toujours activé
Necessary cookies are absolutely essential for the website to function properly. These cookies ensure basic functionalities and security features of the website, anonymously.
Functional
Functional cookies help to perform certain functionalities like sharing the content of the website on social media platforms, collect feedbacks, and other third-party features.
Performance
Performance cookies are used to understand and analyze the key performance indexes of the website which helps in delivering a better user experience for the visitors.
Analytics
Analytical cookies are used to understand how visitors interact with the website. These cookies help provide information on metrics the number of visitors, bounce rate, traffic source, etc.
Advertisement
Advertisement cookies are used to provide visitors with relevant ads and marketing campaigns. These cookies track visitors across websites and collect information to provide customized ads.
Others
Other uncategorized cookies are those that are being analyzed and have not been classified into a category as yet.
Enregistrer & appliquer